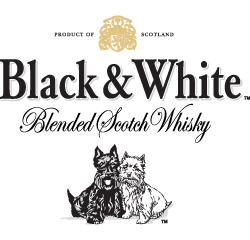 The history time of Black&White equals to the history of Scotch whisky industry, since it is one of the most famous trademarks of Scotch whisky in the world. In 1850s, owing to the invention of uninterrupted distillation method, it became possible to manufacture more light grain Scotch whisky compared to the weighty single malt varieties produced using the traditional copper distillation kettles. It enabled James Buchanan to blend the single malt whisky from the Highlands with grain varieties from the southern regions of Scotland.